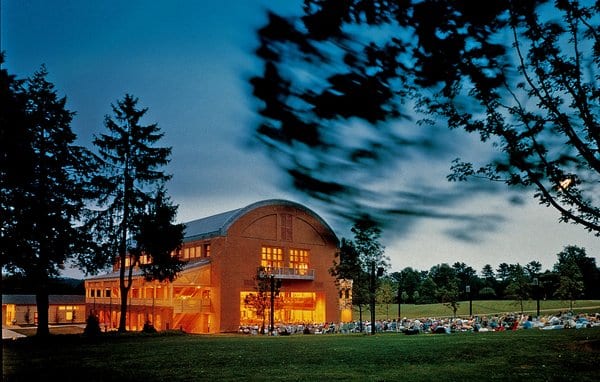 Tanglewood is an estate and music venue in Lenox and Stockbridge, Massachusetts. It is the home of the annual summer Tanglewood Music Festival and the Tanglewood Jazz Festival, and has been the Boston Symphony Orchestra’s summer home since 1937.Tanglewood was named for a work by American author Nathaniel Hawthorne. Hawthorne, on the advice of his publisher William Ticknor, rented a small cottage in the area in March 1850 from William Aspinwall Tappan. While at the cottage, Hawthorne wrote Tanglewood Tales, a re-writing of a number of Greek myths for boys and girls. In memory of the book, the owner renamed the cottage “Tanglewood”, and the name was soon copied by a nearby summer estate owned by the Tappan family.

Tanglewood concerts can be traced back to 1936, when the Boston Symphony Orchestra gave its first concerts in the Berkshires. This first three-concert series was held under a tent for a total crowd of 15,000. That same year, Mary Aspinwall Tappan, gave the family’s summer estate—Tanglewood—to the orchestra. In 1937, the BSO returned for an all-Beethoven program, presented at Tanglewood donated by the Tappan family. In 1938, a fan-shaped shed was constructed, with some 5,100 seats, giving the BSO a permanent open-air structure in which to perform. Two years later, conductor Serge Koussevitzky initiated a summer school for approximately 300 young musicians, now known as the Tanglewood Music Center.

The Boston Symphony Orchestra has performed in the Koussevitzky Music Shed every summer since, except for the interval 1942–45 when the Trustees canceled the concerts and summer school due to World War II. The Shed was renovated in 1959 with acoustic designs by BBN Technologies. In 1986 the BSO acquired the adjacent Highwood estate, increasing the property area by about 40%. Seiji Ozawa Hall  was built on this newly expanded property.

Leonard Bernstein conducted the Boston Symphony at Tanglewood in August 1990 in what proved to be his very last concert. Deutsche Grammophon released a live recording of the concert on CD. In addition to hosting world-renowned programs of classical, jazz, and popular music, Tanglewood provides musical training at the Tanglewood Music Center for pre-professional musicians. Also nearby is the Boston University Tanglewood Institute for high school students. Other youth-symphony organizations have also performed at either the Music Shed or Ozawa Hall, including the Norwalk Youth Symphony, from Norwalk, Connecticut, the Empire State Youth Orchestra, from Albany, New York, and the Greater Boston Youth Symphony.