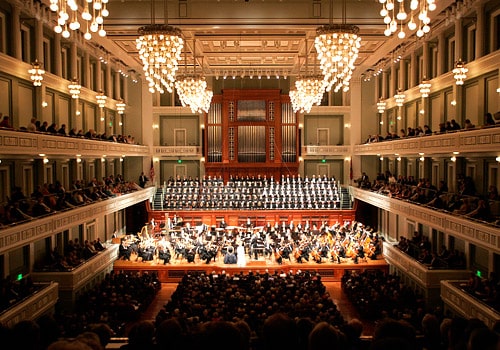 Symphony Hall is a concert hall located at 301 Massachusetts Avenue in Boston. Designed by McKim, Mead and White, it was built in 1900 for the Boston Symphony Orchestra, which continues to make the hall its home. The hall was designated a U.S. National Historic Landmark in 1999. Symphony Hall, located one block from the New England Conservatory, also serves as home to the Boston Pops Orchestra as well as the site of many concerts of the Handel and Haydn Society.

Symphony Hall was inaugurated on October 15, 1900, after the Orchestra’s original home (the Old Boston Music Hall) was threatened by road-building and subway construction. Architects McKim, Mead and White engaged Wallace Clement Sabine, a young assistant professor of physics at Harvard University, as their acoustical consultant, and Symphony Hall became one of the first auditoria designed in accordance with scientifically derived acoustical principles. Admired for its lively acoustics from the time of its opening, the hall is often cited as one of the best sounding classical concert venues in the world.

In 2006, due to years of wear and tear, the original concert stage floor was replaced at a cost of $250,000. In order to avoid any change to the sound of the hall, the new floor was built using same methods and materials as the original. These included tongue-in-groove, three-quarter inch, hard maple boards, a compressed wool underlayment and hardened steel cut nails, hammered in by hand. The vertical grain fir subfloor from 1899 was in excellent shape and was left in place. The nails used in the new floor were hand cut using the same size and construction as the originals and the back channeling on the original maple top boards was replicated as well.

Beethoven’s name is inscribed over the stage, the only musician’s name that appears in the hall since the original directors could agree on no other name but his. The hall’s leather seats are the original ones installed in 1900. The hall seats 2,625 people during Symphony season and 2,371 during the Pops season, including 800 seats at tables on the main floor.