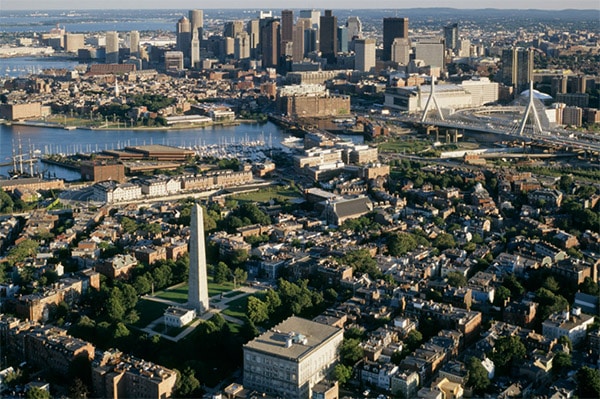 Charlestown is the oldest neighborhood in Boston, Massachusetts, United States. Originally called Mishawum by the Native Americans, it is located on a peninsula north of the Charles River, across from downtown Boston, and also adjoins the Mystic River and Boston Harbor. It was originally a separate town and the first capital of the Massachusetts Bay Colony. Later on, it became a city in 1848 and was annexed by Boston on January 5, 1874. While it has had a substantial Irish American population since the migration of Irish people during the Great Irish Famine of the 1840s, since the late 1980s, the neighborhood has changed dramatically because of its proximity to downtown and its colonial architecture.

Charlestown contains several places of historical interest, many of which are marked by the northern end of Boston’s Freedom Trail. The Freedom Trail ends at the Bunker Hill Monument commemorating the famous Battle of Bunker Hill. The USS Constitution, the oldest commissioned vessel in the US Navy, is docked in the Charlestown Navy Yard. Charlestown was also the location from which Paul Revere began his famous “midnight ride” before the Battles of Lexington and Concord. A restaurant opened in 1780 and still in operation, Warren Tavern, claims to have been one of Revere’s favorite taverns. Of Charlestown’s churches, St. Mary’s is considered one of the masterpieces of Patrick Keely.

The Charlestown Navy Yard, and later Boston Naval Shipyard, was one of the oldest shipbuilding facilities in the United States Navy. Established in 1801, it was officially closed as an active naval installation on July 1, 1974, and the 30-acre property was transferred to the National Park Service to be part of Boston National Historical Park. Enough of the yard remains in operation to support the USS Constitution. The USS Cassin Young, a World War II-era destroyer serving as a museum ship, is also berthed here. Among people in the area and the National Park Service, it is still known as the Charlestown Navy Yard. The South Boston Naval Annex was located along the waterfront in South Boston.