It is a neighborhood of Federal-style row houses and is known for its narrow, gas-lit streets and brick sidewalks. Today, Beacon Hill is regarded as one of the most desirable and expensive neighborhoods in Boston. Because the Massachusetts State House is in a prominent location at the top of the hill, the term “Beacon Hill” is also often used as a metonym in the local news media to refer to the state government or the legislature. Like many similarly named areas, the neighborhood is named for the location of a former beacon atop the highest point in central Boston. The beacon was used to warn the residents of an invasion.

Beacon Hill is bounded by Storrow Drive, and Cambridge, Bowdoin, Park and Beacon Streets. It is about one mile square, and situated along the riverfront of the Charles River Esplanade to the west, just north of Boston Common and the Boston Public Garden. The block bounded by Beacon, Tremont and Park Streets is included as well. Beacon Hill has three sections: the south slope, the north slope and “Flat of the Hill”, which is a level neighborhood built on landfill. It is west of Charles Street and between Beacon Street and Cambridge Street.

Located in the center of the Shawmut Peninsula, the area originally had three hills, Beacon Hill and two others nearby; Pemberton Hill and Mount Vernon were leveled for Beacon Hill development. Between 1807 and 1832 Beacon Hill was reduced from 138 feet in elevation to 80 feet. The shoreline and bodies of water such as the Mill Pond had a “massive filling”, increasing Boston’s land mass by 150%. Charles Street was one of the new roads created from the project. Before the hill was reduced substantially, Beacon Hill was located just behind the current site of the Massachusetts State House.

Beacon Hill is predominantly residential, known for old colonial brick row houses with “beautiful doors, decorative iron work, brick sidewalks, narrow streets, and gas lamps”. Restaurants and antique shops are located on Charles Street. Louisburg Square is “the most prestigious address” in Beacon Hill. Its residents have access to a private park and live in “magnificent Greek Revival townhouses.” Nearby is Acorn Street, often mentioned as the “most frequently photographed street in the United States.” It is a narrow lane paved with cobblestones that was home to coachmen employed by families in Mt. Vernon and Chestnut Street mansions. 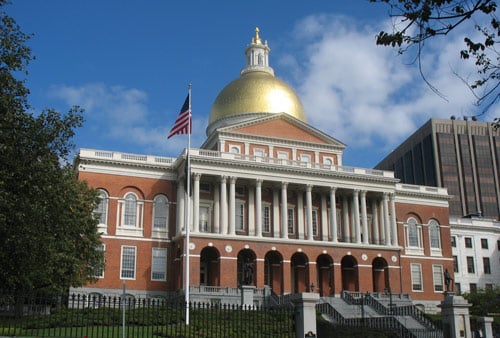